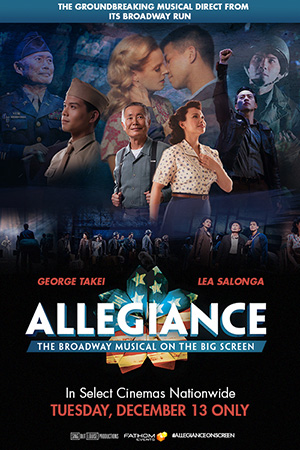 A friend invited me to join her at the one night showing of George Takei’s Broadway Musical on the Big Screen, Allegiance.  The theater here in Denver was packed and sold out.

Based on the experiences of George Takei and his family’s internment in a concentration camp when he was 5 years old.  120,000 Japanese-Americans were forced to leave their homes and imprisoned in these camps after Pearl Harbor. Watching this production was a sobering experience.  I kept imagining my parents living through this.

My parents shared little of their experiences as a United States Army soldier and his wife who was imprisoned even though she was married to a soldier.  What they did share I now realize was pretty sugar coated.

As we were leaving the theater another attendee, a Caucasian woman, turned to me with a pained expression.  She said that she never learned about this in school and was unaware that this even happened until she met and heard about the camps from a Japanese family.

Ditto.  An important part of history that I may only know about because my parents actually lived through it!