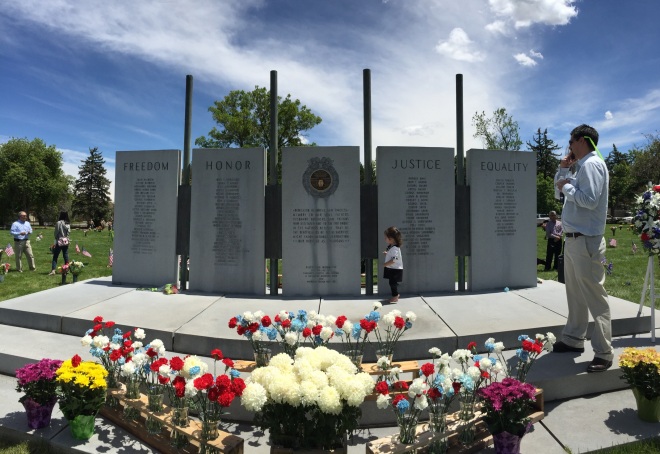 You are likely to find me in one of two places on Memorial Day.   Either way I will be honoring my father and his service to his country in the United States Military during World War II.

In odd number years you will find me at the Nisei War Memorial at Fairmont Cemetery in Denver, Colorado singing with the choir for the annual Memorial Day service.   (Nisei is second generation here in America)

The Memorial is engraved with the names of Japanese American Nisei veterans from the Rocky Mountain region who served in the United States Armed Forces and who are now at rest.

In even number years you will find me at the Bolder Boulder, an annual Memorial Day 10K  honoring United States military.   This is a run, jog or walk race.

About 50,000 people participate every year and the race starts in over 90 waves depending on your speed.

The race finishes in Folsum Field. As you complete the race you enter the stadium where those who completed the race before you and other supporters cheer you over the finish line!

Each participant wears a special bib on their back with the name of the person they want to honor.

I am grateful for my country and the freedoms granted to its citizens which are protected by brave men and women like my dad.

An elderly cancer patient with no immediate family rang 911 because he did not have any food and was physically unable to leave his house to buy something to eat.

Clarence Blackmon was discharged from hospital in Fayetteville, in Arkansas, on Tuesday after spending months there for cancer treatment. The 81-year-old returned to his house without any supplies and anyone close by to call for help, according to ABC 11 Eyewitness News.

Hungry and unable to buy food, he called 911 and asked if someone could buy some groceries for him. “What I need is someone to get to the grocery store and bring me some food because I need to eat something,” Mr Blackmon told the operator. “Whatever you can do to help. I can’t do anything. I can’t go anywhere. I can’t get out of my damn chair.”

News stories that will melt your heart

An hour-and-a-half later, Marilyn Hinson, the operator he had been speaking with, arrived at his front door with police carrying bags full of food and made him some ham sandwiches.

“He was hungry,” Ms Hinson said. “I’ve been hungry. A lot of people can’t say that, but I can, and I cannot stand to see anyone go hungry.”

Mr Blackmon described Ms Hinson as “amazing”, adding: “Us little people need a helping hand every once in a while. Most of the time, we get overlooked. We’re still here.”

He will be getting a home healthcare assistant to check on him twice a week, but in the meantime ABC advised anyone in the area who would like to help him to contact Fable Police.

A Little Free Library, also known as a book exchange post, has been set up in our parking lot! 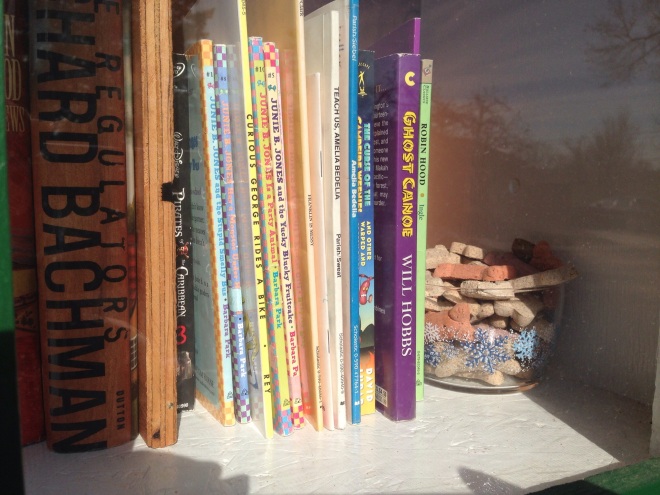 Who knows how many books are sitting on shelves waiting to be read or reread.   This free program allows you to pick a book, keep it for as long as you need to finish reading it, return it and exchange it for a new book.

Or do you have a favorite book you want to share with others?  Just place it in the free reading library!  You may change someone’s life.

This is really a neighborhood book exchange located in the small suburb of Arvada, Colorado.  It creates an opportunity for neighbors to share books, including children’s books.