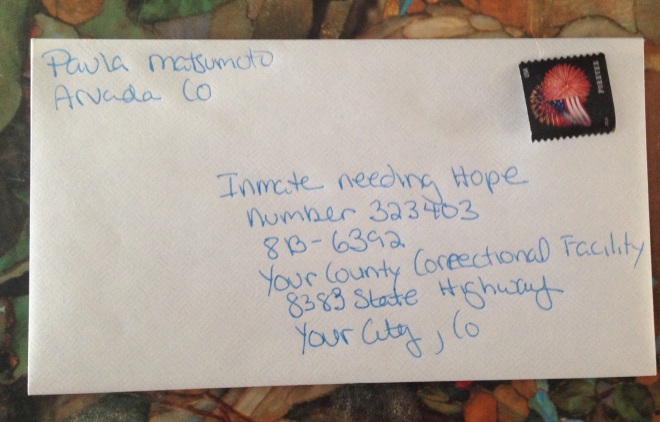 I am still writing to to my friend in prison.  He is teaching me a lot about appreciating life, letting go of things I cannot change, and not forgetting things I am blessed with.

In his own words he is afraid of forgetting things we take for granted each and every day such as the taste of certain foods, smells, and relationships.  He has no choice of foods.  He misses the smell of a forest.  His incarceration has been hard on his relationships.

He is afraid of losing what is the core of his essence, his tenderness, empathy and kindness.

I continue to write to him, mostly about every day things, attempting to make him a part of my life.

I would not have been brave enough to start sketching if I didn’t know him.  He is the most talented artist I know and so I sometimes send him my sketches.  He graciously compliments my efforts and tells me to keep working on my art.

The thing I think he is worried most is his relationships, especially will we be here for him when he is released?

Mary Lou loved working with clay.  She fully intended to start on that teapot Dennis was begging for.  Alone in the usually busy studio she sang out loud and reached for the lump of clay.

Her stomach was growling and her hands were screaming.  She was exhausted and one of those bullying migraines was dancing around, trying to find its way into her head and threatening to take over her life.

She looked down at the piece she had created and realized that several hours had passed.  The migraine, her empty stomach and her hands were forgotten.

A small pile of clay balls was piled next to the tube.  Each ball was wrapped twice in some delicate tissue paper.  So that was what she had made!

One end of the tube was already sealed.   Her breath entered the tube with a soft “haaaaaa”.  Counting as she dropped each ball into the open end, nine, her lucky number.

With another whispered “haaaaaa” she sealed the tube with a disc of clay.  Several small holes were added to each end to allow moisture to escape the tube as it baked in the kiln.  The tube joined other pieces waiting to be bisque fired, looking ordinary in their company.

Cleaning up her space her thoughts were interrupted by her stomach.  She would figure this all out after some sushi and a nap.

May Lou laughed to herself when she realized that Dennis wasn’t getting that teapot anytime soon.

My friend Jane received this Tomahawk, a gift from a friend of hers, a Native American Indian who made it by hand.

She accidentally dropped it and as the tip lodged into the floor she realized she how truly careful she needed to be.

The woodwork is truly amazing I’m sorry my pictures don’t do it justice. 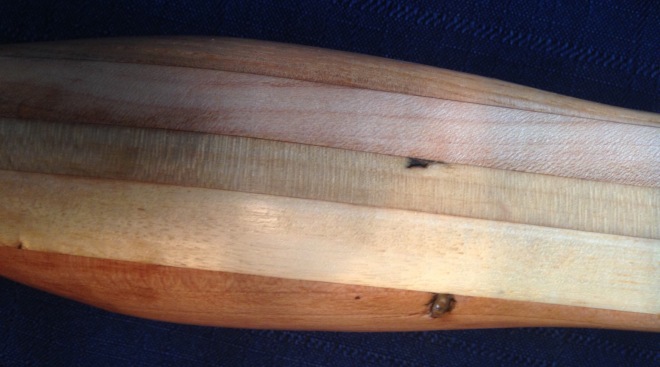 The tomahawk is a symbol of war and peace.

If the Chief decided the his warriors were to engage in war he would raise a red tomahawk at the war council meeting.

If a previously buried tomahawk was dug up this was a sign of war.

To bury the hatchet was a sign of resolving a dispute.

Tomahawks used in war as weapons may have been decorated with eagle feathers earned for acts of bravery or medicine bags for protection and victory in battle.

This weapon takes strength and skill to use effectively.

The tomahawk was a weapon to be thrown or swung like a sword or axe.  An unwieldy weapon, a sharpe knife was more likely the weapon of choice for scalping.

This gift was given to Jane as a ceremonial symbol of peace and friendship.   The detail and work put into the making of this Tomahawk makes it that much more special.

Hallways are no longer dangerous.

The wind, still screaming, somehow smells fresh and is invigorating.

The familiar voice calms you:

Hi my name is Monty and I am a guest blogger here on sanseilife.

Thank you for your support and reading my dog Haiku!

We had a blizzard yesterday here in Arvada, Colorado.  I am sure it was a blizzard because Mom came home early from work.  Roscoe and I helped her make a batch of home made dog food, yum!  We loved having the extra time with her. 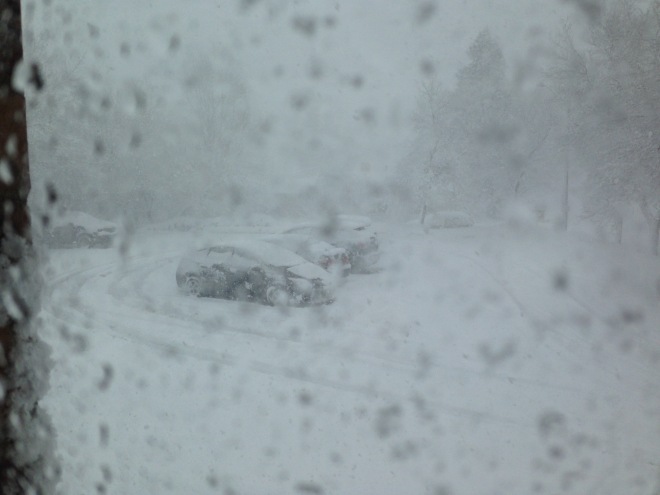 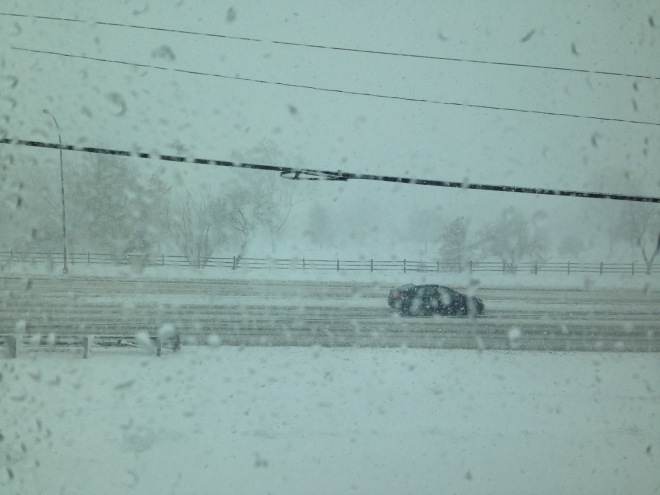 Here are the pictures of Mom’s parking lot at work and the street in front of her building.  This weather prompted her boss to let her come home early. 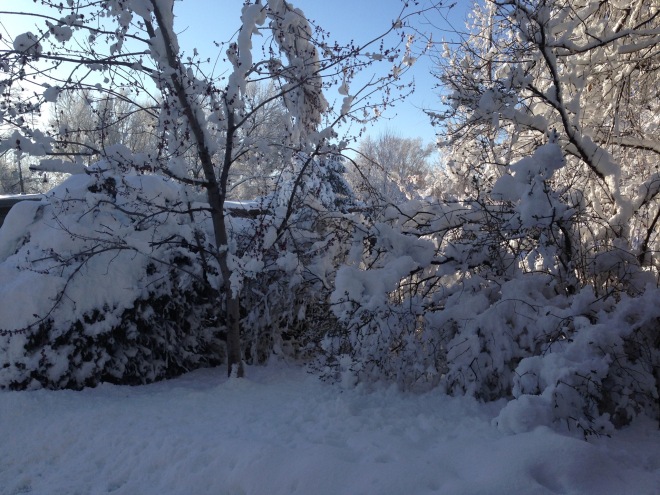 Here is a picture of one of our cars and our yard.  A true winter wonderland.

Mom is one of the few people who loves a good snow storm so us dogs are lucky to live with her.  Here is my Haiku: 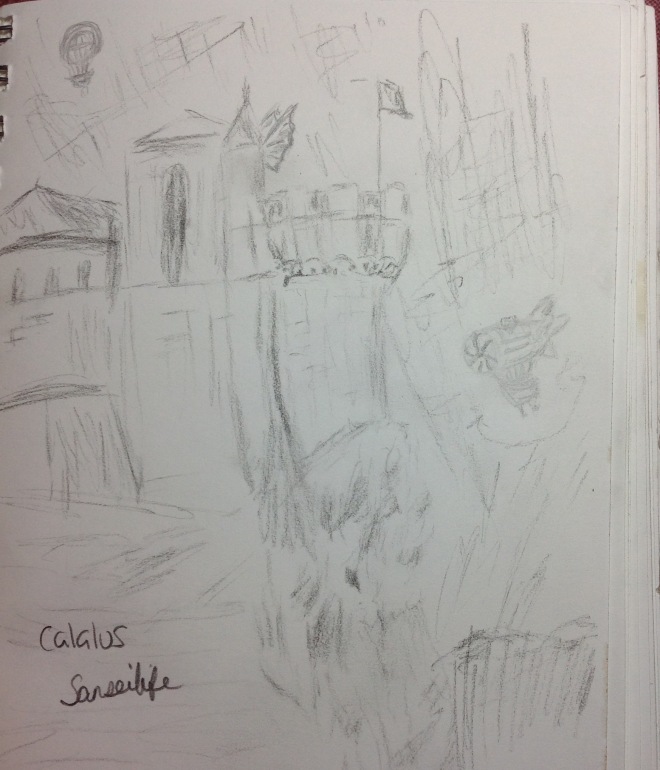 Barry Allen aka The Flash kept me on my ass, his piercing gaze daring me to move.

To proud to look away I met his stare and fell into the mystery realm, Calalus.  A castle on a hill.

In a dizzy “Where’s Waldo” moment I realized there were three flying machines hidden in my vision….

And the Silverbell artifacts? I needed to see these in person. Discovered in 1924, right here in Arizona…, pictures drawn by some wannabe sanseilife archeologist artist would not suffice.

Might I be destined to save the universe?  I would need help and I knew there was help in Calalus.

Still on my ass I realized I was headed for a great adventure.

Racing down unfamiliar hallways your instinct tells you to find the familiar but your fear leads you down dangerous pathways.

Is this a nightmare?  You scream in an attempt to wake yourself up.  The wind screams back pushing you further into the unknown.

Overwhelming terror.  You are truly lost.

The familiar voice reaches out to you:

Hi, my name is Theodora.

My brother Teddy lives in a Jeep but I live in a house.

We both write Haiku.  Here is one we wrote together, we both felt invisible today.

The building that was once your refuge now terrifies you.  The wind that rushes through its corridors is the breath of the building itself and pushes you toward something unknown, heedless of your needs.  With each step new hallways appear until you have lost your way.  No longer familiar and safe your refuge has become a monster.

The familiar voice speaks to you: 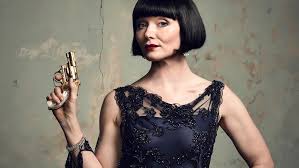 Adapted from the novels by author Kerry Greenwood, the adventures of Phryne Fisher.

A glamorous private detective in 1920s Melbourne.  Phryne is single and independent and proves with her brilliant tactics that women can have both exciting personal and professional lives.

I am totally addicted to her courage and her amazing wardrobe.  Her clothes are made with fabric authentic to the times, lots of flowing romantic creations.  I not only look forward to each of her new adventures but what the heck is she going to be wearing?

Seasons 1-3 can be found on Netflix.  No word on season four yet but as amazing as Phryne and her supporting cast are I am sure there will be many more episodes.

What next?  Well hopefully season four and I am really looking forward to reading the over 20 novels written by Kerry Greenwood!