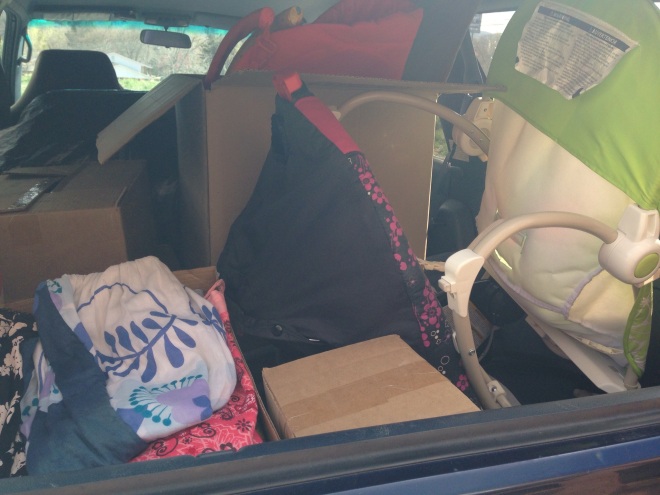 Arvada Christian Church recently filled up my truck with goodies for Arvada The Rising Church’s ministry for the disadvantaged and homeless.

Thank you to both churches!

Here in Arvada, Colorado our woman of the year, Rebel Rodriguez runs an amazing food bank serving disadvantaged residents and Arvada’s homeless.  She also stocks an equally amazing little free food bank on the corner of Grandview and Olde Wadsworth at the Rising Church.  The Blessing Box.

Inspiring me to make snack and lunch bags for our children and homeless.

Thank you Rebel for your community service, to read more about Rebel go here to Rebel’s article.

Drawn with stick pen from pew.

Each year our little community at Simpson United Methodist Church fills shoe boxes with surprises for children in need of a smile.

Operation Christmas Child is a project of the international relief organization Samaritan’s Purse. Donations of shoe boxes filled with small toys, hygiene items, and school supplies for children who do not receive gifts, children affected by war, poverty, natural disaster, famine and disease; and to children living on Native American reservations in the U.S.

The program started in the United Kingdom in 1990 by Dave and Jill Cooke has expanded and since then has delivered gift-filled shoe boxes to over 135 million children in more than 150 countries and territories.

Some fun things I found this year?  A fluffy puppy purse with for some lucky girl (I wanted to keep it for myself and secretly named it Henry), and fold up back packs with about 30 different smiley face emoji decorations, purple for girls and blue for boys.

Use:  donated to church.

The church has two uses.

The  candle lighting area for concerns or celebrations.   The small dish of folded origami crosses, take one after you light your candle as a remembrance.

“Lessons from Hannah, Our Mother of Faith”

“Lessons from Hannah, Our Mother of Faith”

Today’s lection is the last of three weeks that focuses on women at the margin of society. Like Ruth last Sunday, Hannah is a woman who was marginalized and discriminated for reason beyond her control. She was barren or childless, and it was a shame for a woman not to bear a child. In the Bible, God is said to be one who opened and closed the womb, and there is no biblical story about an infertile man. So like many cultures, barrenness is considered a woman’s problem, not a man’s. Barrenness or infertility is thus construed as a divine hand or curse. Now, having a son would validate Hannah and restore her status in society.

In many male-dominated cultures, having no children, especially male children, was a sign of failure in life. It is seen as lack of a future because the “bloodline” is continued through the male child. Walter Brueggemann in The Prophetic Imagination says that barrenness is a metaphorical reference to “a loss of a future and therefore to hopelessness.” He says that “the notion of barrenness may be taken as a condition of despair in our society.” Indeed, it could be taken as a condition of our churches today. Many churches lament that they don’t have young people, youth and children. These are our future who have vanished and have very little or no interest in church. Where then is the future of the church? Hannah’s barrenness, wilderness, emptiness or insecurity of the future is perhaps a reflection of the state of the church today.

Also think of so many people who experience a deep sense of the lack of a future ahead of them. They see no way forward. Think of the veterans who suffer mental problem with no hope for future. Think of undocumented aliens who face deportation and separation from their loved ones any moment. They may be working hard, but their future is grim and uncertain. But the good news is that God “opened” Hannah’s womb and she gave birth to a son who became one of the greatest prophets. The church is called to be hope for the hopeless, to hold out hope and make a way for those who see no way.

She truly lived in the moment.

“Corpus Christi” in Latin means the Body of Christ. At the continued requests of Juliana of Liege, Pope Urban IV instituted the Festival of Corpus Christi in 1264. The festival is a celebration of the Lord’s Supper.

Surprisingly, the Bible does not say much about the celebration of the Lord’s Supper. Jesus said very little about it. The only imperative statement comes from Luke 22:19, “Do this in remembrance of me.” More surprisingly, the partaking of Corpus Christi has been the deepest point of division in the church. There is so much pain and discord around the celebration. There are many differing views and theological beliefs about communion, especially about the supposed nature of the bread and the wine on the table of fellowship.

The institution of Corpus Christi is not meant for theological dispute and schism. When we celebrate communion, we say, “Make them be for us the body and blood of Christ, that we may be for the world the body of Christ.” We partake communion so that we may become for the world the hands, the feet and the heart of God. By partaking the body and the blood of Christ, we become God’s hands, feet and heart to serve, to heal and to love as God would. That’s all it is!

Our bodies have limitations. Our bodies do not look like the ones we see in magazines. Rather, ours is a broken one. It has aches and pains. It is wrinkled and worn out. But our bodies can still be the body of Christ. They can still be the hands, the feet and the heart of God in the world. The scars, wounds, pains and aches in our bodies enable us to identify with others in similar situations. Without these, we cannot empathize with the broken, the scarred and the wounded. So each morning as we wake up, our prayer ought to be “Thank you, God, for yet one more day in which I can be your hands, your feet, your heart in the world.” 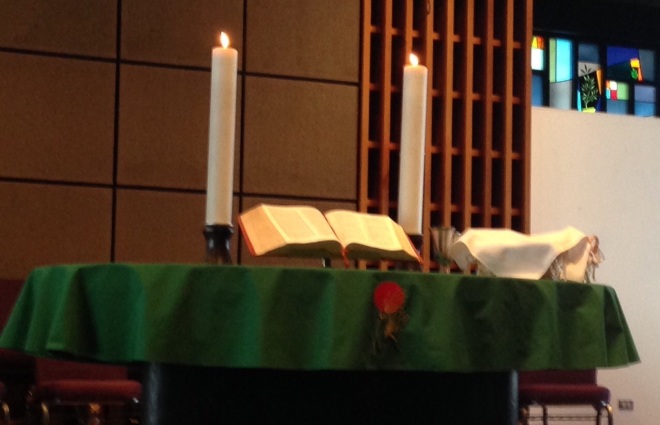 There are two ways in which you and I can be troublemakers. One way is by simply causing trouble – creating fear, spreading racism and bigotry, engaging in mass shooting, committing fraud or amassing wealth through ill-gotten gains. Creating trouble for oneself, one’s family and society by engaging in evil.

As Christians, we stand on the prophetic tradition, a tradition with all kinds of trouble making radicals who made wicked kings, rulers and rich folks uncomfortable. The role of the Old Testament prophet was not foretelling, but forth telling, speaking truth as it is. That’s exactly what Amos did in the capital city of King Jeroboam. On hearing Amos, the chief priest declared, “The land cannot bear all his words.” Indeed, truth is hard to bear. One cannot not be troubled by a prophetic voice.

John the Baptist is considered one of the last prophets. He could not remain silent. He had to speak up against what he saw in his time as evil and immoral. He was a thorn in the flesh and heart of King Herod and Herodias, his brother Philip’s wife whom he married. John stirred things up that others were afraid to do. And it cost him his life.

When there is any kind of discrimination and injustice, the church should be out there stirring things up, crying and demanding for justice and equality for all. The prophetic voice of the church is the voice of God in unjust society. It is the voice of God in unrighteous generation. It is much easier to smile and be nice than to confront someone for wrongdoing. Being a troublemaker is not easy or comfortable, but it’s a part of the Christian calling and discipleship. May God help us to be faithful and bold troublemakers when circumstance demands our unwavering witness.