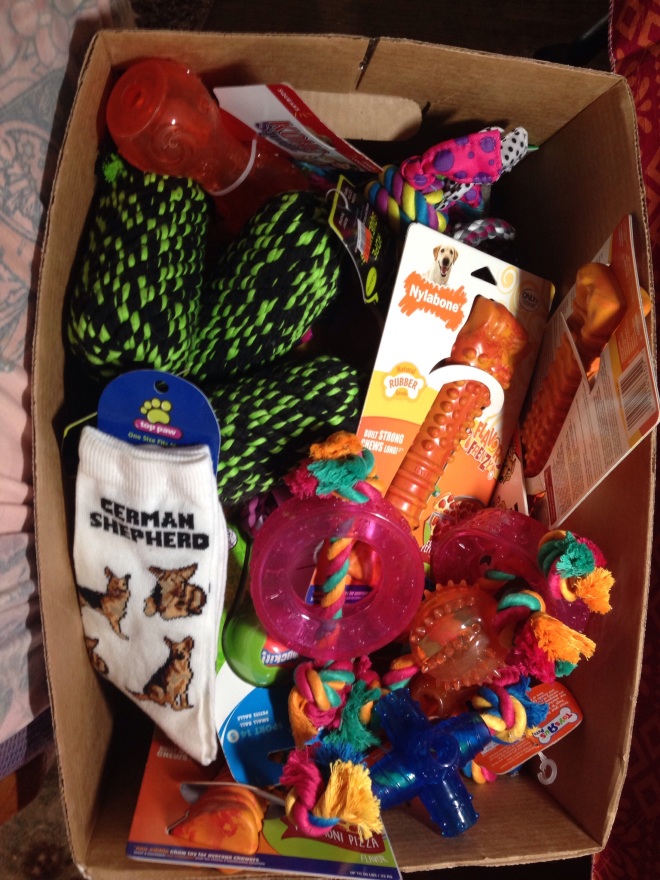 Our story? We have a secret dog toy stash! Well we guess since we blogged about it it’s not a secret anymore is it?

Our sister Haley, her husband Matt, and their three kids Buster, Remmy and Ranger are coming for a visit!

We want our nephews to have a great time so we are collecting toys in anticipation of their visit.

Last but not least, Buster

We are working on a dog treat stash too, but that’s a whole nother blog post isn’t it?🐾🐾🐾

Hi, my name is Rommy and I’m a guest blogger here on sanseilife with another Haiku.

Animal Haiku is instinctive and natural, can you learn from this simple message?

i knew he was ill

comfort we cried together

he is at peace now

Recently incidents of bullying keep creeping into my life.  Nothing against me but people I care about have been dealing with different kinds of bullying.

Sitting with my glass of wine a couple of nights ago after a conversation with a friend dealing with bullying, a dark memory came back to me about a bully.

We had just all entered 7th grade and were being bussed to a new school.  The most popular girl and the least popular girl from the graduating 6th grade were riding on the same bus.

Ms. Popular had a habit of saying catty things about Ms. Not Popular.  Ms. Not Popular’s family was struggling to make ends meet and her new school outfits were obviously from one of the discount stores, you may remember them, Woolworth’s.

We would stand around in the dark waiting for the school bus to pick us up.  It was fall so we didn’t need jackets yet.

Ms. Not Popular was wearing a frilly blouse.  It was cute but definitely not a Penney’s or Joslin’s blouse….  Definitely from Woolworth’s.  I noticed it had a cute frill in the front and the bottoms of the sleeves had a nice frill.  It was a good choice and I had a feeling it was picked out with care, that she probably had to agonize over what her family could afford for new clothes.

Ms. Popular started to make fun of her blouse, boldly pointing out the quality and claiming the blouse looked cheap.

I had a decision, as a 7th grade girl who is trying to make her way in society I thought I had two choices:  one-I could keep my mouth shut;  or, two-I could join in with the teasing.  Then I realized  I had a third choice, I could stand up to Ms. Popular.

I thought about it for a moment, actually took one of those deep breaths and then I told Ms. Popular exactly what I thought of her and her treatment of Ms. Not Popular.  I knew in my heart everyone was cheering me on but my 7th grade girl’s sense told me that no one was going to back me up.  Sure enough the other girls immediately stepped away from me, even Ms. Not Popular!  I became Ms. Not Popular Too for the rest of the school year.

Yeah, I suffered some bullying from those girls, there may be nothing more vicious than the popular girl scorned and the wanna be popular girls kissing butt.  But as my Dad used to say, “Builds character!”

I have always loved frilly blouses and own one in all the colors and patterns you can imagine.  Yay for the character building of frilly blouses!

Sandy and Anna, master quilters, have been busy with a project I suggested to them.

My mom suffered from a type of dementia at the end of her life. The doctor said it wasn’t really Alzheimer’s and I was grateful for that.

She always remembered who I was, and every weekend we worked on a flower arrangement and  a jigsaw puzzle.

She sometimes got confused or forgot things. She and I discussed her memory loss and she knew that she needed to be kept safe for when she did get confused.   She was living in a memory care center with other people that suffered from different kinds of dementia or Alzheimer’s.

There was a condition that most of the people she lived with suffered from called sundowners. At the end of the day a terrible confusion would spread through the residents.

My mom didn’t usually catch the confusion but it would make her anxious.  She usually went to her room to take a nap or read.  When  sundowner time came, she insisted that I leave as it was just too unsettling to be around during this time.

The anxiety and confusion these poor folks felt each and every day has stayed with me. These quilts are designed to be small, lap sized. All the little items on them  offer a distraction to the confused mind.

All the amazing textures, buttons and zippers, little pockets are wonderful at sundown.   The quilt on the left here has a plastic sleeve where you can insert a picture, too clever huh?

Thank you Sandy and Anna for all you do this is really going to make a difference  and I know it’s going to help relieve a lot of the anxiety these people suffer from.

It is also shown that using your brain in creative new ways helps keep your memory active so not only are Sandy and Anna doing a wonderful thing for others but their brains are getting the benefit of creating this amazing art!

P.S.   I hope they are also using up some of their quilt stash and scrap materials!

The knitting and crochet for charity group is making these itty-bitty infant socks!

Not only are they using tiny needles and delicate yarn but they are also using four needles at one time!!

Yikes!  They are fast and their tension is perfect (have you figured out I have tension envy).

The group discussed newborn kits for those in need. Homemade socks, hats, blankets plus baby lotions, diapers and all the stuff new moms need for their new babes.

Here is a square I knitted for prayer blankets.   My sister loved  butterflies and this just brings me close to her.  My tension needs a lot of work.

A lovely sweater made by our fearless leader Nancy. 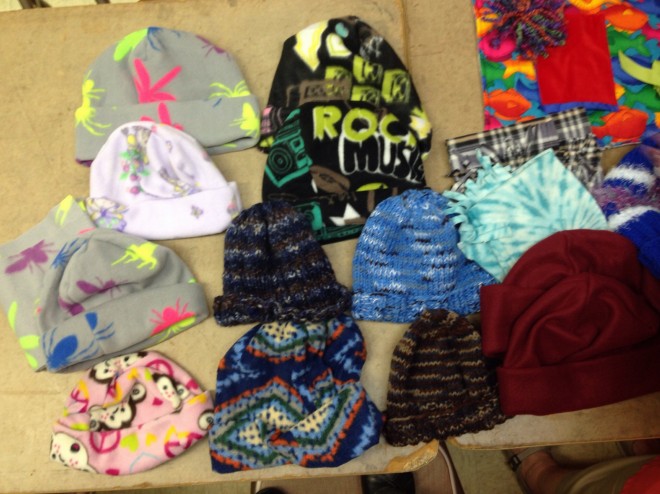 Grace has been very busy knitting and sewing hats and scarves. 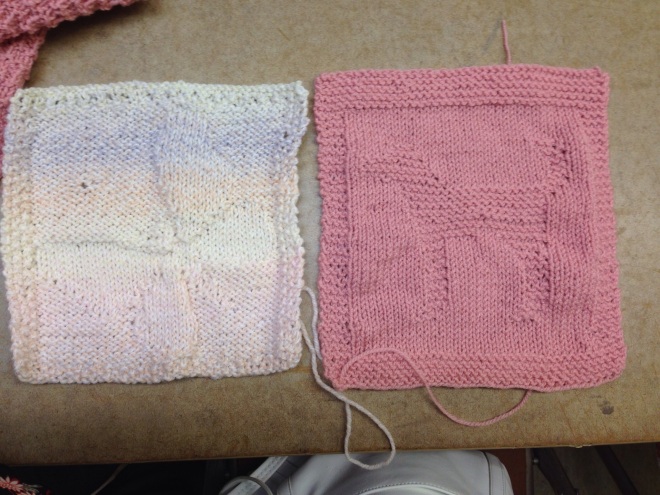 More of my experimental squares.

I have to tell you I’m really surprised at how calming and meditative learning to knit is, thanks Nancy!

Give yourself permission to experiment.

Reach for your dreams.

Find the positive in your failures and don’t give up.

Go with your heart today and feed your spirit.

I’ve been advised by another blogger that yarn stashes are caused by Yarn Stash Fairies.

What a relief to know I do not have a serious addiction!

Unlike some fairies Yarn Stash Fairies carry no malice.

They are romantic creatures that want you to enjoy texture and color.

So next time you have an uncontrollable desire to pull into the parking lot of that new yarn shop do not despair, it’s not an addiction, it’s the Yarn Stash Fairies trying to release your creative talents!

Hi my name is Monty and I am a regular guest blogger here on sanseilife.   My story today?  My human brother.

I have three brothers. Rommy, Roscoe and the human.

We can’t remember his human name but we call him Treat Master because he’s the only one of the four of us that can open this container:

He is also the only of my brothers that will cuddle me and let me snuggle. He likes naps almost as much as I do.

When mom says “What are you boys up to?” he’s included in the pack!

I love to rescue random things from the Thrift Store.

Somehow I missed reading this novel “Under the Dome”.  I have discovered it was also made into a tv series.

When I saw it at the Thrift Store, no brainer, rescue it and when I finish reading it I’m putting it in the Little Free Library aka Book Exchange at the end of the parking lot at work.

When I got home I found this picture tucked inside the book.

A real mystery, nothing written on the back.  A mystery picture inside a Stephen King book deserves a story, don’t you think?

Meet Mark and Julia, happy here but will that last?

Mark cannot resist buying anything with an “M” on it, hence the green cap from Michigan State University.  He someday hopes to go to Michigan State, Montana State, well you get the picture.

Mark does not understand the allure of a good mystery, horror or fantasy novel.  He loves autobiographies followed by biographies.  Before Julia met Mark she read all of Stephen King’s books.

After she met Mark she took up making jewelry, specifically necklaces.  She made the necklaces worn in the picture.

Mark loves to run and he takes his dad’s German Shepherd Max for a run almost every day.  The morning this picture was taken a hooligan squirrel chattered at Max from a tree and Max  instinctively ran in front of Mark tripping him up with the leash. The emergency room visit revealed no broken bones but a badly sprained wrist from throwing his arm out to break his fall.  The sling  is just to keep that wrist quiet for a few days.

Mark and Julia had a huge misunderstanding which led to mutual agreement to give their relationship a break.  One of the first things Julia did was to purchase the latest Stephen King novel, one she was dying to read “Under the Dome”.  One of the heroines in the book is named Julia and she was intrigued.

This picture was pinned to the cork board in her hallway, a place where she could see it every day, but now she removed the picture to use as a bookmark…. 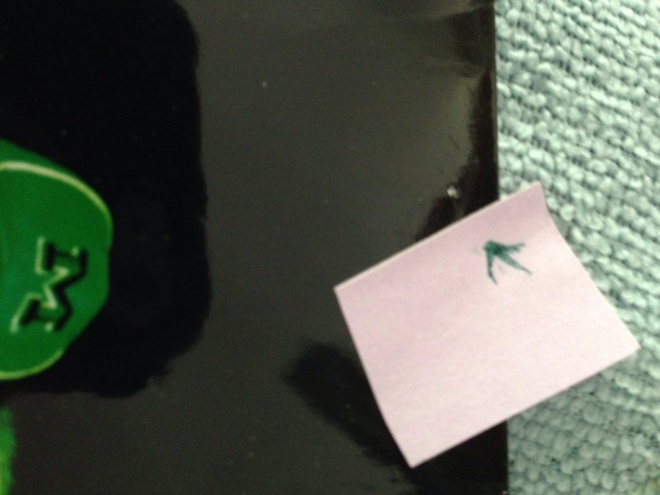 Mark has called Julia and invited her to lunch. He mentioned that during their break he got hooked on this series on television called Under the Dome which is based on a book by Stephen King.  Isn’t that the guy Julia used to read all the time?  He thought perhaps, as a shared and bonding activity, they could read Stephen King novels together.   As Julia was racing out of the house to meet Mark she tucked the book Under the Dome in her bag along with the matching his and her necklaces she had just finished making.